The first few words of my next novel – Stone, Paper, Scissors – to be published in the next few months, although there’s still lots more editing to do.

The piped music blasted out the tune from the hymn, ‘Morning has broken’ as the coffin was brought into the small crematorium on a wheeled trolley. I looked around. The congregation was made up of just four people there to pay their last respects to the deceased. There were two other women, myself and one man.
One of the women was helped to her feet by her young carer as the coffin was pushed down the aisle by the people from the funeral directors and put on the dais at the front of the room. I covered my face with a tissue as I felt the corners of my mouth trying to smile when the old woman struggled to her feet leaning all her weight on her walking-stick. Her back was bent and she was looking towards the floor. Her hands in black lace gloves were resting on the silver knob at the top her walking stick.
The sunlight shone through the coloured glass of the windows high up in the walls reflecting on the highly polished wooden pews and back in a prism of shafts of coloured light.
The old woman tapped her cane twice on the stone floor and glanced sideways across the aisle to me. I made a slight inclination of my head to acknowledge her message. The knocking told me the driver of my transport had been dealt with and was no longer a problem.
Her companion had a dark woollen coat over her pale blue carer’s uniform. On her feet she had a sensible pair of flat black leather shoes, her finger-tips were poking out of her black fingerless gloves. Her pale face was almost hidden beneath a pair of glasses with thick lenses and wide side pieces made from purple plastic matching the colour of the dye in her hair. Other than that, the only hint of colour in her clothing was a red scarf wrapped round her neck.
I was seated on the pew at the other side of the aisle with a chunky man next to me, his dark jacket stating he was a prison officer. I pulled the sleeves of my black coat down to try and hide the thick heavy bracelet on my left wrist. It was not a normal or even pretty bracelet. It was, in fact, one half of a set of hand-cuffs. The other half was locked on the right wrist of the man next to me.
After the short service and words spoken by a woman who had never known the body in the coffin, the curtains began their slow traverse across the open nave and the over-loud music blared out again, this time with the tune ‘Get off my Cloud’ by the Rolling Stones. It seemed out of place now. But, it had always been one of her favourite songs. One of my daughter’s favourite songs.
The four of us drifted out of the side door and took it in turns to shake hands with the minister, before we moved towards the Remembrance Garden. There we spent several minutes looking at the flowers and words left there by other mourners for their loved ones.
‘Have you got a tissue, please?’ I asked the carer.
‘Here,’ she said, passing over a big handful of white paper tissues.
The elderly woman staggered and would have fallen if my guard had not grabbed her arm with his free hand. ‘Are you okay, ma’am?’ he asked the bow-backed lady.
I could see the concern in his eyes. He seemed to be an okay kind of guy. It seemed a shame what was going to happen to him.
‘Yes, thank you. I slipped on the wet stones,’ she said. Her voice gave the impression of trembling with age. ‘It’s certainly awful weather today isn’t it?’
‘You can say that again,’ he said, rubbing his hands together and dragging my hand out of my pocket as he did so.
‘Would you like some coffee?’ the old lady asked, looking at the bald-headed man, with his chubby cheeks and double chin.
‘Well … I’m not sure. I’ve to take …’
‘I know that. But, surely you can have some compassion. No one needs to know. Let her have a few minutes to grieve for her only daughter.’
‘Here,’ the carer said, ‘you look cold. I’ve poured you a cup from our flask.’
The young woman passed the plastic beaker to him. ‘What’s your name?’ she asked.
‘Why do you want to know?’
‘I’m just being friendly. That’s all. You don’t need to tell me if you don’t want to.’
‘It’s Mr Patel,’ he said, draining the remains of the coffee and passing the cup back.
‘Do you mind if I just go and look at my brother’s headstone whilst we’re here Mr Patel,’ I asked him. ‘It would do me so much good to know it’s not been vandalised or anything.’
‘Where is it? We can’t stay here long. You know that. You were told the conditions before you were given leave to attend your daughter’s funeral by the Governor.’
‘I know that, Mr Patel,’ I said. I looked into the setting sun. The branches of the trees in the parkland surrounding the crematorium were silhouetted against the pale blue sky.
‘It’s not far, it’s just over there,’ I said, pointing towards the field where the neat rows of headstones poked up from the ground like silent fingers. ‘I promise it won’t take me more than five minutes. Promise.’

Fifteen minutes later, I was sitting in the back of a black transit van with white lettering on the side proclaiming it was a ‘Private Ambulance’. The young woman who had been the ‘carer’had removed her uniform and she was now back in her normal style of dress, blue jeans, black hoodie and a white baseball cap, her long dark hair pulled through the gap at the back of the hat.
The old woman was no longer stooped and bent over her walking-stick. She had morphed into a paramedic driving the ambulance. She was wearing dark green overalls with the word ‘Paramedic’ in a fluorescent strip across her back.
I was to be the patient if, for some unlikely reason, we were stopped. There was a face mask handy to pull over my nose and mouth, and a bandage ready to go round my head and over one of my eyes should the need arise.
‘Do you think he’ll be okay?’ Phillipa, the one-time carer asked.
‘What do you care?’ Alexandria the driver asked. ‘He’ll come round in the morning, unless someone finds him first. But he’s not going to remember anything about the last few hours. I can assure you of that.’
‘How’s someone going to find him, in the dark, between the headstones?’
‘Oh, stop worrying Phil,’ I called from the back. ‘You’re not going soft on us are you?’
‘No. It’s just … What if he gets pneumonia in this weather? You know how wet and cold it is out there?’
‘He’s got plenty of blubber on him to keep warm. Don’t you fret,’ I said.
‘I don’t want any more deaths on my conscience.’ I heard her say in a whisper. But, for the moment, I chose to ignore it.
‘We’ll soon be away from here,’ Alexandria told her, as she turned onto the M6 and pointed to car towards the south.
‘France – here we come.’ She turned and smiled at her friend.
Taking one hand off the steering wheel for a moment, and with a tenderness I’d never seen before, she smoothed a stray strand of hair away from Phil’s eyes. 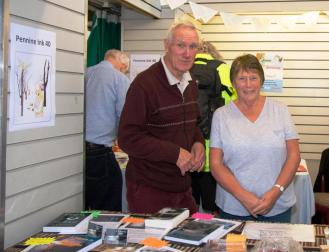 I, and several of my friends at Pennine Ink Writers, read our work at the Burnley Literary Festival held in the Burnley Market Hall on 5th October 2019.

We also sold several copies of the Pennine Ink magazine.

I left a copy of each of my novels and my non-fiction book with the ‘that 0282 place’ which is situated upstairs at Burnley Central Library. They are available to purchase from there.

I also discovered another writing group in Padiham. They meet on the last Saturday of each month at Padiham Library and I hope to see how I fit in there.